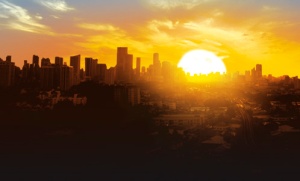 Looking at human society today, it is incredible how complex our systems of communication, commerce and government have become. Whatever has been gained in terms of convenience and time-saving, we cannot escape the fact that the primary reality of nature and the whole living cosmos has been pushed to the margins of life. Deadening routines and rampant materialism have taken over much of everyday thought, while most of our entertainment industry is driven by an obsession with instant sensation and images designed to shock our overworked and weakened psyches. In a subtle but very real sense, we are all under attack from mass society.

Back in late Victorian England Richard Jefferies gazed with amazement at the frenetic motions of the London crowds, then, as now, driven on by a powerful complex of impulses, interests and fears that few had the time or the insight to examine or question. Standing by the Royal Exchange in the City of London, Jefferies tried to make some sense of the grim reality before him.

“There is an indistinguishable noise—it is not clatter, hum, or roar, it is not resolvable; made up of a thousand thousand footsteps, from a thousand hoofs, a thousand wheels—of haste, and shuffle, and quick movements, and ponderous loads; no attention can resolve it into a fixed sound.

Blue carts and yellow omnibuses, varnished carriages and brown vans, green omnibuses and red cabs, pale loads of yellow straw, rusty-red iron clanking on paintless carts, high white wool-packs, grey horses, bay horses, black teams; sunlight sparkling on brass harness, gleaming from carriage panels; jingle, jingle, jingle! An intermixed and intertangled, ceaselessly changing jingle, too, of colour; flecks of colour champed, as it were, like bits in the horses’ teeth, frothed and strewn about, and a surface always of dark-dressed people winding like the curves on fast-flowing water. This is the vortex and whirlpool, the centre of human life today on the earth. Now the tide rises and now it sinks, but the flow of these rivers always continues. Here it seethes and whirls, not for an hour only, but for all present time, hour by hour, day by day, year by year.

Here it rushes and pushes, the atoms triturate and grind, and, eagerly thrusting by, pursue their separate ends. Here it appears in its unconcealed personality, indifferent to all else but itself, absorbed and rapt in eager self, devoid and stripped of conventional gloss and politeness, yielding only to get its own way; driving, pushing, carried on in a stress of feverish force like a bullet, dynamic force apart from reason or will, like the force that lifts the tides and sends the clouds onwards. The friction of a thousand interests evolves a condition of electricity in which men are moved to and fro without considering their steps. Yet the agitated pool of life is stonily indifferent, the thought is absent or preoccupied, for it is evident that the mass are unconscious of the scene in which they act.

But it is more sternly real than the very stones, for all these men and women that pass through are driven on by the push of accumulated circumstances; they cannot stay, they must go, their necks are in the slave’s ring, they are beaten like seaweed against the solid walls of fact. In ancient times, Xerxes, the king of kings, looking down upon his myriads, wept to think that in a hundred years not one of them would be left. Where will be these millions of to-day in a hundred years? But, further than that, let us ask, Where then will be the sum and outcome of their labour? If they wither away like summer grass, will not at least a result be left which those of a hundred years hence may be the better for? No, not one jot! There will not be any sum or outcome or result of this ceaseless labour and movement; it vanishes in the moment that it is done, and in a hundred years nothing will be there, for nothing is there now. There will be no more sum or result than accumulates from the motion of a revolving cowl on a housetop. Nor do they receive any more sunshine during their lives, for they are unconscious of the sun.” (‘The Story of My Heart’).

With his own heart he tries to look into the hearts of those caught up in the maelstrom of work, money and the unstable energies produced by mass society.

“Is there any theory, philosophy, or creed, is there any system or culture, any formulated method able to meet and satisfy each separate item of this agitated pool of human life? By which they may be guided, by which hope, by which look forward? Not a mere illusion of the craven heart—something real, as real as the solid walls of fact against which, like drifted sea-weed, they are dashed; something to give each separate personality sunshine and a flower in its own existence now; something to shape this million-handed labour to an end and outcome that will leave more sunshine and more flowers to those who must succeed? Something real now, and not in the spirit-land; in this hour now, as I stand and the sun burns. Can any creed, philosophy, system, or culture endure the test and remain unmolten in this fierce focus of human life?”

Jefferies, of course, is conscious all the time of the sun and the workings of the cosmos all around – not as physical facts only but as primary realities which are part of our true existence. Our minds, our hearts, have the deepest affinity with the elements of nature and the mysteries of existence. These things are in us; we know them instinctively. The materialistic fantasies of natural selection and Big Bang have nothing to say to our true natures, being divorced from the realm of the heart. They are intellect-produced, as devoid of creative insight as the governments and financial centres that underpin the rigid materialism of our age.

Let’s remind ourselves of the wonders of the elements of nature…or rather, let Jefferies remind us.

“The water that runs there in the brook; the earth which I place my foot on; the air I breathe; the sunlight coming so softly through the apple bloom: these are the four miracles. They are astounding miracles: they are marvellous beyond expression.” (‘The Old House at Coate’)